This Google-map is interactive. You can move & zoom, and change the views.

Only 15 minutes from Amsterdam central station: bike trips in the country and small fortified towns.

On the map above, nearby Amsterdam is to the left, just outside this image.
Along the winding river Vecht, the old town of Weesp, with station and bike rental. If you zoom in a bit, you can distinguish the layout of the ramparts around the old centre.
Follow the river to the north to where it flows into the former "Southern Sea" (Zuiderzee): the fortified town of Muiden and its medieval castle.
To the right, you first see a couple of lakes (natural park "Naardermeer") and then a star-shaped structure : the uniquely well preserved fortified town of Naarden.
Continue east and you enter drier woodland, intersected with wide plains covered with heather, and sand dunes.
Top of picture : a tip of the new land Flevoland. Nothing but water until the 1960ies.

Holland is a pretty crowded country. But even here there still is a lot of open space and nature, as you can see.
For the time being, because here also, there are massive building programs on the drawing board ...
Conveniently close to Amsterdam, this region (in Dutch called "Gooi and Vecht area") is ideal for learning more about history and culture of the Netherlands.
A great variety of historical landscapes, and fortified towns within a short distance. Abundant illustrations of the elements that formed this country and its people during the last millennia. 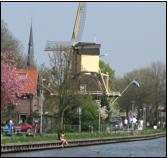 It's all here to see, and discover.
On your own, or with a guided tour that will help you focus. Providing a framework for what you see. Because, as people shaped and reshaped this land over the centuries, things are not always what they seem to be at first sight.
See also History Walks and Bicycle Day Trips.