Why the bike became popular in the Netherlands.

Those Dutch and their bikes. Two of a kind ...
Yes, the country is pretty flat. Yes, it's a small country of short distances.
But why did the bicycle become sort of a national icon in the eyes of the world ?

Two very crucial reasons : infrastructure and social acceptance.
To explain that, just a bit of history. Or what else did you expect on a site like this ? 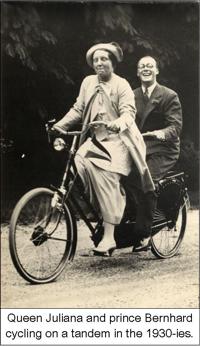 Bicycles became practical (inflatable rubber tires !), and reasonably affordable a hundred or so years ago. Interesting to see how very differently things evolved in two neighboring countries : the Netherlands and Germany, where at least the northern part is equally rather flat.
In Germany the bike became very popular in circles of workers/unions/proletarians ; the higher classes looked down on this humble iron horse. They were raving about their real horses !
And then came the First World War, and all the Germans surely had other things on their mind.
More or less the same starting situation in Holland, but this country managed to remain neutral in the first war. There was shortage, but peace. And for workers and middle class alike, the bicycle became an accepted reliable and solid means of transport. Perfectly fitting with how the Dutch liked to see themselves : a sober hardworking people, where showing off was not appreciated. An island of reason in a world sunk into war and total madness.
As there was a social and political consensus on the place and use of the bicycle, government began developing an infrastructure for this new vehicle. Gradually an impressive network of (separate) bicycle paths, road crossings, signposts, bridges, etc was created.
Other relatively simple measures favored the use of a bike as well. Like the common rule since the 1920-ies that every new built house should have a shed of some kind for bikes, with its own rear access. Even flats have a place where one can park the bike(s) safely. Generally, that's in the basement.

Of course, also in the Netherlands, the car became dominantly important since the 1960-ies. For a while cycling and bicycle infrastructure was under fire.
During the seventies however, there was massive popular reaction against the automobile demanding more and more of the limited Dutch space. Which led to the present situation where bicycle paths, bike parks and other facilities are pretty standard in street planning.
This does not mean that there are no threats, as urbanized territory and the number of cars is ever more exploding.
Still, most children in this country grow up with a bike. Meaning that car drivers know from own experience that it is a very unpleasant feeling when a car races past you closely. Those things make a difference.
The same in the Netherlands as in other countries : the last 20 years or so the bicycle acquired an extra environment-friendly image, and the sporting aspect gained in importance.
But the big difference is that over here, the bicycle is and always was primarily a generally accepted vehicle to go from A to B. To go to school or to work. To do the groceries. The bicycle as normal part of everyday life.
In the Netherlands today, 70% of all journeys under 7,5 km are made on a bicycle.
You can't say that of many countries.

Experience the Dutch bicycle paths and routes yourself ; see this page for a few bicycle day trip suggestions.
For an informative or educational program on Dutch bicycle infrastructure, feel free to check availabilities and tailor-made possibilities : contact.