In 1609 captain Henry Hudson, with his ship "De Halve Maen" (the half moon), sailed up the American river that received his name later on. Working as an explorer for the Dutch East India Company (VOC), he was searching a passage to the Orient.
Instead, he found fertile lands that were going to form the colony of New Netherland, with towns like Nieuw Amsterdam (New York), and Beverwijck (Albany). 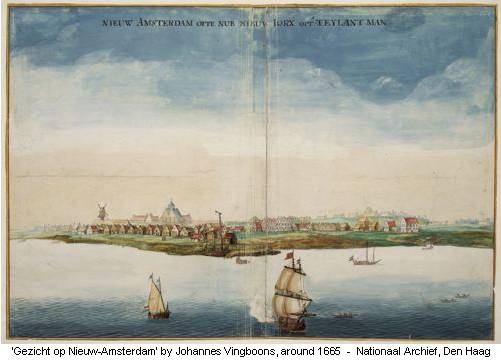 In New York City there's hardly anything left of Dutch 17th century architecture.
See also these video clips on a New Amsterdam Tour by best-selling author Russell Shorto, who wrote "The Island at the Center of the World : The Epic Story of Dutch Manhattan and the Forgotten Colony That Shaped America".

Fortunately there are plenty of places in Holland that can give you a very good idea what it must have looked like.
Also in this region close to Amsterdam, with a couple of small fortified towns surrounded by a varied countryside and lots of water.
See pages fortified towns, and cycling for thematic suggestions on day trips.